Brandts Church of the Brethren
History
THE PEOPLE - A quiet event took place in early August 1708. A group of five men and three women were baptized in Schwarzenau, a province of Germany, by being dunked forward into the river three times. This baptism signified their willingness to follow the separatist belief that baptism should only follow true repentance and faith. This distinct new group of believers, led by Alexander Mack, became known by their unique way of baptism, now called triune immersion. The small group of eight quickly grew to two hundred. These believers followed the Bible's truths and faithfully sought to align their lives to the teachings of Christ.

In 1719, a group of about twenty Brethren families left Kreyfeldt, Germany, to settle on American soil.  Another group followed in 1729. They were seeking religious freedom as they settled in Germantown, Pennsylvania.

Establishing their first church in America in 1723 with 23 members, an evangelistic spirit soon led to the rapid growth of the church. By 1770, 15 congregations had been planted in Pennsylvania, with another 17 in Maryland, Virginia and the Carolinas. The Brethren made themselves at home in the New World, proving themselves to be industrious and honest, and earning reputations as ideal citizens.

The group became known as "Dunkards" for their unique way of baptizing. Many debates concerning baptism were held with ministers of other denominations. The Brethren held fast to two main points: 1) the Greek word for "baptize" means to dip into or cover over with water completely, 2) John's baptism of Jesus was a complete immersion in the Jordan River, after which he came up out of the water. Today, the practice of three times forward, in the water, from a kneeling position, remains the practice of the Church of the Brethren.

The Brethren kept their worship simple and unliturgical.  While singing was enjoyed, in either German or English, musical instruments were forbidden.  Services sometimes lasted several hours, with several preachers taking their turn. Parishioners were seated on backless benches during the entire time of worship. The Brethren loved their practice of Love Feast which included the ordinances of Feet Washing, the Lord's Supper and Communion. Since congregations were spread over large areas, folks would travel long distances. Those who were too far from home to return that same evening would often find accommodations in meeting house attics where long rows of beds were set up with a partition down the middle to separate the men from the women.

For nearly a century and a half, the Brethren had enjoyed worship in their homes. However, the 1800's proved to be an important time of rapid building of meeting houses. "The Brethren, as a church and as a people, were simple. They shunned adornment and excess and were moderate toward and respectful of other human beings, their animals, and the land. At their worst, they were narrow and severe; at their best they loved God, each other, and the earth with simplicity and careful attention." Excerpt from The Old Brethren, by James H. Lehman
THE CHURCH BUILDING - The Brandts Meeting House was constructed in 1853 on land purchased from David and Eliza Brandt, costing $25 for 57 perches. This limestone building was 40 feet wide by 62 feet long and included a sanctuary for 300, a small kitchen, a nursery and an attic.  Brandts was the first of three churches which would later form the Back Creek Congregation (Upton and Shanks being the other two churches). In August, 1862, the congregation bought one acre and 86 perches of land across the road to be used for parking. In 1881, backs were put on the benches.

Originally, services were held once a month. The first three weeks of the month, each of the three Back Creek churches took turns holding services. On the fourth Sundays, services were held at various preaching points throughout the community. Brandts began a Sunday School program in 1892, originally maintaining the program only during the summer months. Year-round Sunday School classes began in 1915. In 1922, a pulpit, a delco light plant and a furnace were installed in the church, with electric lights and a new furnace arriving in 1935.

The year of 1951 marked the beginning of a building fund with the goal of building a new church across the road. By 1964, ground had been broken for a new church with an overall size of 48 feet by 71 feet. Then on April 11, 1965, Palm Sunday, the congregation gathered in the old church and walked out its doors for the last time. Singing "Onward Christian Soldiers", the group walked across the road to the new church. A memorial, built from some of the stones taken from the old church, now stands as a monument to the old stone Brandts church building.
As the congregation expanded, a new wing was added in 1991. This wing consisted of rooms for a sitting area, an office area, a parlor and a board room. Finally, in 2002, an educational wing was added.

HISTORY OF THE BRANDT FAMILY FOR WHOM THE CHURCH WAS NAMED - The Brandt family consisted of three brothers who immigrated to America in 1742, settling in Lancaster, Pennsylvania. Some of their children moved to Cumberland County, to what is now known as Franklin County. The first communion held in Cumberland County was at Adam Brandt's home in 1798. Brandt's Church was built on family land in 1853. The grandchildren moved west into Ohio around 1828. David Brandts (1799-1870) was an elder in the Back Creek congregation in the mid-1800's.

​After careful consideration and voting by members , Brandts made the  decision to transfer affiliation from Church of the Brethren to the Covenant Brethren Church, (CBC.) With the help of representative Larry Dentler, the action was made official on Sunday August 22, 2021.

TODAY - The Lord has richly blessed the congregation of Brandts with over 160 years of worshiping together. Hundreds have come to place their faith in Jesus Christ through this church. Based on our solid foundation, we are now committed, more than ever, to pursue holiness, to seek the lost and to disciple new believers. Our mission is to bring glory to Christ as we seek to minister to all ages, in our church, in our surrounding community, and even abroad. 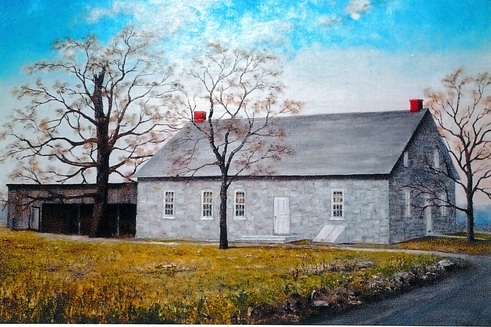